My second book will be called Luminous Mind. It is already written and I am looking for an agent to represent it. You can read a short excerpt of the book on this page. 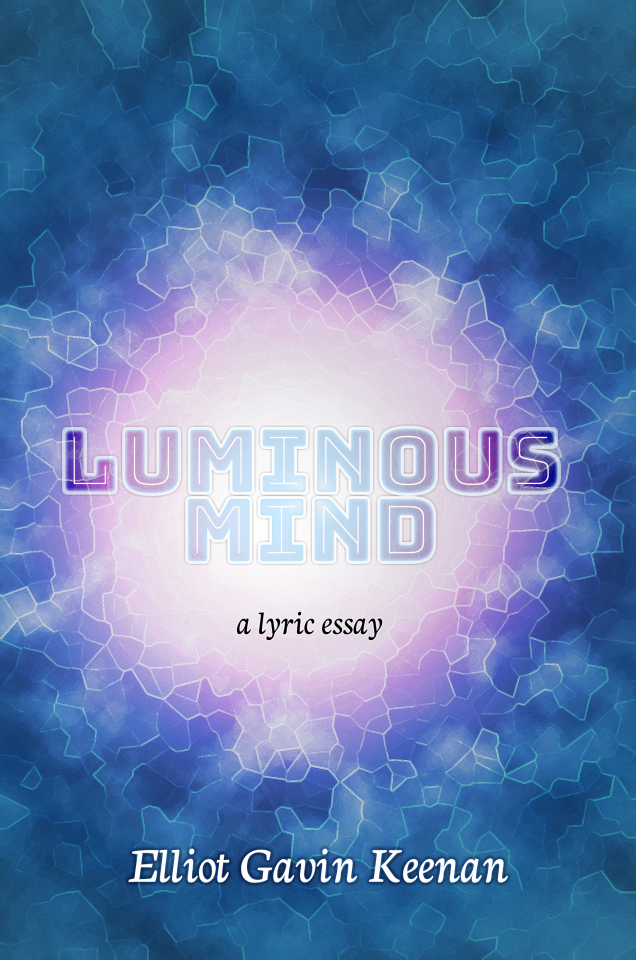 Home — About Elliot — Interviews — Contact & Social Media — Favorite Quotes
I’m sitting alone in a white-walled hospital room. My forearm (decorated with the greenish-yellow smudge of bruises from implanted IVs) dangles limply over the edge of the hospital bed, as if grasping there for some invisible human touch. I want to become a fossil, I think, as I observe my hands. Blood occupies the space beneath my fingernails, the idiosyncratic curvature of my fingerprints traced in crimson red. Nobody asks me about this. I should write, but I can’t. The wound is still tender and characterized by a hollow aching, like an echo.

The first thing my nurse, Mohammad, tells me upon my arrival in psychiatry: You know, they saved your life, Elliot.

I know what he means. Most suicide attempts are either fatal (such as a gunshot to the head) or have very low lethality (such as an overdose on the vast majority of drugs). Relatively few fall somewhere in between. A battle for my life was fought in an operating room at UCLA Medical Center. My lithium levels rose to double the toxic limit — twice. Three rounds of dialysis were done in total. I was intubated. Both of my lungs collapsed. And then, I went into a coma.

But two days later, I wake up. I’m hooked up to a bunch of machines. No obvious sign of brain damage, and both of my kidneys have been spared.

I feel very little about this. It was cold. Maybe that coldness was the dialysis running its course through my veins, my blood cooling as it sloshed through the machine. Somehow, I think of it as death’s touch on my forehead — an inversion, the blank spaces, the whiteness of a page — and in its grasp, every warm thing seemed incredibly distant. I was somewhere far away. Then I was pulled out of the water. My tongue hasn’t fit right in my mouth ever since.


I’ve only been seeing my psychiatrist, Dr. Cook, for a month. She sits at my bedside in the ICU. Without my glasses, I don’t recognize her at first. She has dark hair and smiles and me with pink cheeks. She says she’s really glad I’m alive. I was watching your lithium levels as they were posted in your file. They went down after dialysis, but then they went up again, and they just kept going up, she recounts. Dr. Cook returns the next day, too. She says it again: I’m so glad you’re alive, Elliot, inviting me to say I feel the same way. My heartbeat monitor ticks away in a steady metronome.
Elliot Gavin Keenan is an author of creative nonfiction.